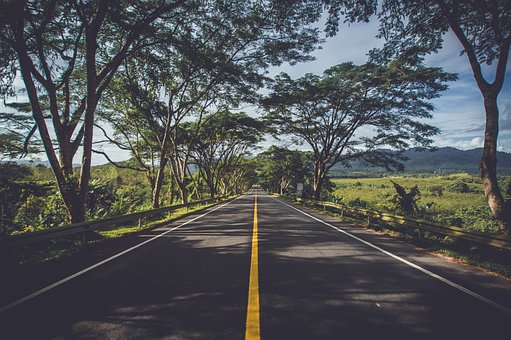 We’re making flirty banter as he’s driving down a highway; I watch one of his smooth hands guide the steering wheel as the other moves gracefully to the knob on his left to change gears.  Looking at his large hands, I suddenly want them all over me – but seeing as how he’s driving, I opt to put my hands on him.  There’s a moderate amount of traffic along the highway, including tall trucks wherein the drivers could see us from their cabs; I ignore this fact and reach my small, pale hand over to unbuckle his belt.

I’ve done this before, so he’s not surprised; rather, he leans his pelvis forward and grins at me.  I unbutton his jeans, pull the zipper down carefully, and pull his stiffening cock out from his pants.  He closes his eyes for a tenth of a second and sighs with barely-parted lips as I start grazing his cock with the tips of my fingers.  Once it gets a bit harder, I lean under his left arm and wrap my lips around his warm flesh, taking him into my mouth and running my tongue around his head.  I eagerly blow him as he struggles to concentrate; when I have to move so he can change gears, I look at him with pleading, lust-filled eyes and tell him how desperately I want him inside of me.

He turns right down the next road; we search for a place where we can pull over, but there is no place.  We’re right outside of a mid-sized town, so it’s all driveways and private field entrances.  We turn around and come back toward the main highway, my hand stroking his shaft.  He asks what I think about just pulling over on the side of the road to make out a bit; sounds good to me, I say.  But I want so much more than that.  I take my panties off under my skirt and grab a condom from the backseat; I ask him what he thinks about fucking me on the car juuuust a little bit.  Before anyone can pass us.  Just a few thrusts, I say.

Within two minutes I’m bent over the bonnet, my red sundress up over my hips, and he’s pushing into my swollen and waiting cunt, jeans mid-thigh – I’m slippery and he eases in, taking his time to tease me even though we don’t have it.  We (surprise!) don’t stop after a few thrusts; the taboo of fucking in public in broad daylight is so arousing that I tighten myself around him and beg him not to stop.  He puts one of his beautiful hands next to me on the car and holds my hip with the other, just like when he was driving – only now, he’s driving himself into me.  We can see cars and trucks flying by fifty meters down the road along the open highway, and I’m gasping with wanting him deeper.  More.  I wonder what the drivers would think if they could glance over and see us.  We don’t want to push our luck, though; after a few minutes he pulls out – neither of us completely satisfied, both of us feeling a temporary relief.

I let my skirt fall and he pulls his pants up and I turn around to kiss him as fully as I can; how often do you get a partner who’s down to fuck in the middle of the day on a car near a busy highway?  I smile and tell him he’s the best; he says I’m swell, and we kiss again, and the love I have for him fills me up.