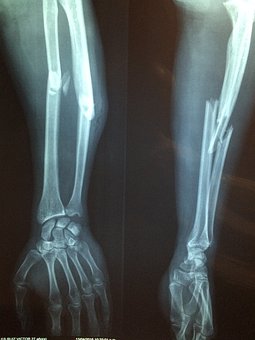 There’s an infectious axiom that floats around daytime television, self-help books, and yes – blogs: No one else can love you until you love yourself.

During my darkest hours, I was loved.  For every day I was most full of self-loathing and despair, there was a person in my life who loved me… and probably couldn’t see the corrosive feelings gnawing away at my insides.  Just like I couldn’t see their love.  Like there was an invisible wall between us.

Those people propelled me to start a ten-year journey of healing from a place of self-injury to a deep self-love… and I did it in a way that would make life coaches cringe hard.

Stage One: Build a fortress.

In my late twenties, I met some rebellious and raucous women who inspired me to say, “Fuck this.”  I stopped looking for love and relished just having a good time; I casually dated and never let anyone get close to me for years.  Using this defense mechanism of putting up walls allowed me to do two important things – learn who I was and what I wanted for me outside of relationships, and embrace casual sex.  I’m very thankful for both.

I’d had so many excruciating experiences wherein I a) developed Real Feelings for a boy, b) told him, c) had sex with him to get him to like me back, and d) felt crushed when surprise! He didn’t.  This is probably one of the reasons why I just stopped being that attracted to men.  Dating women allowed me to express my feelings in a safe space (for the most part).  They didn’t lie to or mislead me in order to get sex; in fact, if anything, I had to work on my communication skills in order to tell them exactly what I wanted up front and be really honest when I wasn’t looking for a monogamous relationship – before the sex.  Not only did I have relationships (and phenomenal sex) with strong, adventurous, no-nonsense, compassionate, intelligent, and hilarious women – I was surrounded by them in my community.  Dating women taught me that I have inherent value that is not directly tied to my cunt.

Step Three: Allow yourself to fall in love recklessly with someone you know will break your heart.

I started dating men again because I fell in love with a coworker who I knew was going to leave in a matter of months. When I realized a month in how intensely and romantically I loved this man compared to his palpably platonic love for me, I acknowledged it and dove in headfirst.  I allowed myself to feel all of my feelings – the euphoric and the excruciating – and when I made it through the other side, I’d learned not only to survive, but to open my heart completely because I knew I could survive and recover from heartache.

[Step 3.5: Travel to a tropical locale.  Feel the breeze, listen to the waves, self-evaluate, and drink rum.  Have a lot of sweaty sex with someone who makes you laugh hard.]

Step Four: Recognize the value of other people’s love.

I never have to guess how The Engineer feels about me, and he never has to guess how I feel about him; we tell each other every single day earnestly and without prompting.  His emotional intelligence and general smooshiness have made me reflect on my expression of love to friends and family and theirs to me – and I try mindfully not to take a single drop of that love for granted.  When I was in my early twenties and was surrounded by people who loved me, I couldn’t see the forest for the trees.  Or, rather, the tree – the tree being whomever I happened to be infatuated with at the moment.

Lots of people have loved me when I didn’t love myself – when, in fact, I felt empty, worthless, and unlovable.  And their love, whether or not I felt it, allowed my fractures to be re-broken and eventually mend – if not perfectly, enough to make me feel whole in and of myself.

If I’m going to reach for the stars, the star I’m reaching for may as well be the sun! (Yes, I DO know the sun is behind me in this photo, so I’m reaching the wrong way.  That’s mostly how I operate.)

The first words ever uttered to me in session were, “Get undressed, bitch.”

I am a fantasy, I thought.  This isn’t real.  I’m not me.  He can’t get to me.  “Yes, master,” I replied calmly.  He saw what he wanted to see: a pretty little girl doing his bidding.  His kink was to be powerful.  To be obeyed with no hesitation.

I existed as a mirage for years, a lucid fantasy concocted in the deep psyches of men.  Half-real and half-dream, floating in and out of the consciousness of my clients.  I’m probably still tucked away in some corner of their minds as a blurred image, a whisper, a tug.  Well – not me, I mean.  Her.

When I tell people I worked in a dungeon, half of them reply, “Oh – you mean that whips and chains stuff?”  I don’t.  I personally never used a whip; they take a remarkable amount of practice and skill to use without incurring unintentional injury.  I have used chains in session, though mostly to hook handles to the ceiling so I could pick myself up and swing my heeled boots deep into someone’s testicles.

People are really surprised when I tell them that most of my sessions in the dungeon were more like therapy.  If a serious masochist came in and wanted to be tortured, we weren’t a good fit – my heart was never in hurting people, and there are a million instruments and toys I just never learned how to use.  I didn’t wear a lot of black leather or bark orders at anyone; there are a LOT of women who do this exquisitely, and I am not one of them.

Likewise, while I thoroughly enjoy pain, I can only handle so much.  And I have no desire to be verbally humiliated – even if I’m being paid for it.  There were clients who came to see me who pushed my limits in ways I explicitly told them I didn’t want them to, and I never saw them again.  She never saw them again.

The clients who came to see her again and again were ships lost at sea who were looking for a safe harbor.  They were mostly people stuck in marriages with spouses who either didn’t approve of their kinks or worse, didn’t care anymore.  Even though the services I provided were ostensibly kinky in nature, they never felt like a media portrayal or performance of what mainstream culture thinks of when it thinks of kink.

I wore slinky dresses, kimonos, or lingerie, made a lot of eye contact, asked questions, spoke in a soothing voice, listened.  I never feigned interest in a client who was sincere.  What I did felt more like somatic therapy – a gentle caress, a loving beating, an acceptance and normalization of wants and needs.  This is what I excel at: empathy.

Sex workers are therapists and care takers.  We meet clients where they’re at and walk alongside them… or inside of them.  It’s hard work.  Emotional labor is labor, and I was shaken badly by a couple of sessions.  But mostly, my clients brought joy and relief through surrender into my life.  They also taught me everything I know and made me a better kinkster.  I learned on the job from my clients, and that’s why I can now teach The Engineer how to use a cane properly.  Their impact (see what I did there?) on my life reaches far beyond our sessions, and I hope my impact on them does as well.

P.S.  For every hour session I did, I worked another hour of prep and clean up.  Tip your sex workers, people.  Sex work is work.  Especially those of you who write out entire dialogues and insist on going back and forth via several emails going over every single detail of the session before going into it – that takes time and effort.

Now that I’m mired in the mountain of paperwork that is teaching in the United States (as it is in most countries, I’m sure), I’m longing for my carefree summer days floating above the sea…

This one is for you, my nest.

I come home one day to find you out back in the garden; you’d come home from a long day at work, ready to relax, only to remember that you’ve got a ton of stuff to take to the tip, and it has to go in the morning – so you’d better load up the car tonight.  By the time I get home, you’ve spent an hour carrying armfuls of heavy rubbish; you’re sweaty, dirty, and sore.  I float in, cool as a breeze after having been in an air conditioned office all day, to see your back muscles flex as you pick up the last load.  You turn around, look me in the eye, and drop it where you stand.

I chuckle.  “Long day, lo-?” I start asking, but before the words are out of my mouth, your lips are pressed against it and you’re clutching me with soil-crusted fingernails, not giving a shit if you leave streaks on my pale peach blouse.

You charge, forcing me to the trellis against the back wall of our building – the one with the overflowing plum-colored bougainvillea – and crush the flowers with my back as my purse slides down my arm and slips to the ground.  “Stay,” you order me, as you rummage for something among pots, tools, and patio furniture.  You find a length of twine underneath a pair of gloves and swiftly tie my wrists together like a boatswain before attaching them to the trellis above my head. 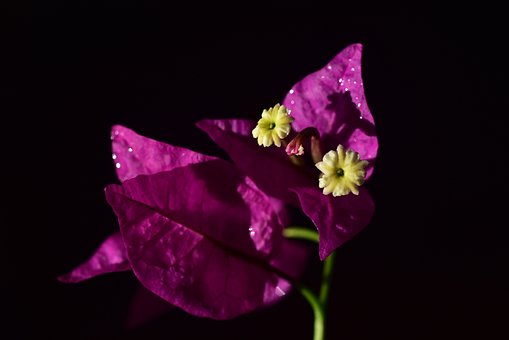 You unbutton my blouse and shove the top of my undershirt under my tits, letting them spill out so you can apply vacuum pressure to my nipples; I’m so taken with surprise that it’s a few minutes before I realize that the neighbors could see this.  All of them.  The thought of it makes my cunt burn.  I want to get on my knees in the earth and take you in my mouth, only I can’t.

As soon as I think it, your belt is unbuckled and your cock is out, popping up from behind the confines of your jeans.  Watching you stroke yourself and not being able to touch you is torture and rapture.  You reach under my skirt and move my knickers to the side so you can gather up my nectar with your fingers to use as lube to stroke yourself with.  I watch you take the flowing juices from my body and use them as your own, wanting to tell you that it’s not fair – if you’re going to smear them on your dick, do it by sliding into me – but I don’t.  Instead, I watch wide-eyed, heart thudding, as you continue to wank with fervor.

Suddenly you stop.  You press your mouth to my ear and whisper, “Do you want my cock inside of you?”  I choke back saliva, and before I can answer, you’re on your knees, yanking my knickers all the way down and my skirt all the way up.  “Well done, love,” you say, taking a hooked finger and drawing silky webs away from my thighs.  I whimper.