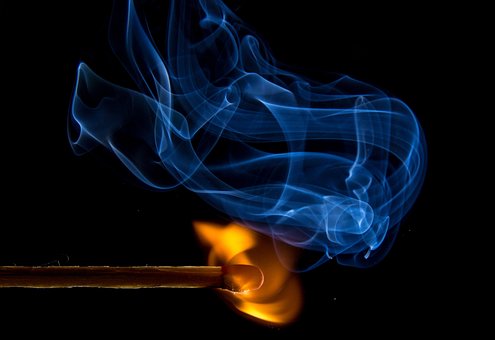 I always thought the smell of smoke was disgusting until I met her.  She was a smoker and bartender besides; it was etched into her skin like hieroglyphs, telling stories of several heavy nights of heartbreak and disappointment wherein she acted as therapist.  I’d watch the smoke circle above her head some nights in swirls, afraid to break the spell by bisecting them with my non-smokers hand.  Everyone smoked then.  Except me.

I taught swim lessons down at the local Y.  It didn’t matter how many times I showered after getting out of that warm pool; I’d forever smell like the chlorine dumped there night after night.  I guess we both smelled of some kind of death.  It drove her nuts.  She’d wrinkle her nose when she nudged it into the back of my neck at night, asking me whether or not I ever used shampoo.  I’d turn over, pin her down, and stare at her. “Don’t you ever use mouthwash?”  I’d ask before pressing my lips to hers, desperate for the intermingled taste of ash and scotch.

I didn’t want her to change clothes when she came home.  Smoke smelled like her smelled like sex.  As soon as she walked in the door – even if I didn’t hear her come in – I could smell her.  I needed to be in her.  I’d yank her tank top over her head and down her scrawny arms, put it to my nose, and inhale before flinging it aside.  I loved to bend her over on the bed, yank down her jeans with one hand, and put the other hand on the small of her back.  I’d move it up her back until my thick fingers were nestled in her hair, at which point I’d grab a fistful and pull her head up so she could hear me loud and clear: “You’re mine,” I’d say.

“Then take me,” she’d always say.  Sometimes, when I’d slide my cock into her mouth, she would tell me that it smelled like a kid pissed in the pool.  She was funny – I loved that about her.  I’d laugh and tell her that in that case, I guess she was licking piss.  The way she ran her tongue up and down my shaft while sucking me made me crazy; I could never stay in her mouth long enough to come.

Instead, I’d grab her legs, wrap them around my waist, and tell her to hold on tight as I rolled over onto my back.  As she was sliding down onto my dick, I always wanted her to come closer… to press my nose against her inundated skin and breathe her in.

A lot of our friends say they can’t stand the scent of smoke anymore.  That as former smokers, it makes them gag.  Not me.  One whiff makes me hard as a rock.  People don’t smoke much these days – but every once in a while I’ll step outside the bar at night and it will hit me: The drift of a Camel, those nights when you were mine long ago, and the divine scent of your cunt and addiction.

16 thoughts on “Smoke Gets in Your Eyes”