On a recent drive home from visiting extended family, my mom and I got into a fight, which isn’t surprising in and of itself – we can’t spend any real amount of time together without fighting.  What is surprising is that on this occasion, instead of reacting the way I normally would (sighing heavily and shutting down), I used a communication technique from books about ethical non-monogamy.

The situation was this: She said something passive aggressive and meant to evoke feelings of guilt (“Honey, you must be so excited to go to DC so you can get away from your mom.”); in a raised tone of voice, I told her that it’s not okay to guilt trip me; she told me it wasn’t a guilt trip, then lapsed into the silent treatment.

I tried talking her out of it for a while, but nothing was working – then finally, a light bulb went off.  “You’re a good mom,” I said, “and I love you.  When you say things like that, it makes me think that you think that I think (confusing, no?) you’re not a good mother, but you are.  And it’s okay if you need validation.  I should say this more out loud: You’re a great mom and I love you so much.  If you need reassurance, just ask and I’ll give it to you!  We all need reassurance and validation from the people we love.  I do, too.”  And poof!  Just like that, she came out of silent mode to tell me that she didn’t think that I thought she was a bad mother and that she loved me, too.  We talked about how hard it is that my sister and I live far away from her, and she really does worry that we don’t want to spend time with her.  Most of her friends have children who still live in my hometown and who have kids of their own; I know it’s emotionally difficult for her that we don’t.

Then she said something really interesting. When I told her that there were a lot of people in my life that I care about, she said, “I guess sometimes I just feel jealous.”  And instead of saying, “That’s crazy – we’re both adults,” I held her hand and said, “Yeah, it’s gotta be hard to have someone depend on you for so long and then become completely independent.  I understand why you feel that way.” Of course, being childless, I can never truly understand – but I can try. And trying makes a world of difference.

Even parents – those people who are supposed to be our rocks – need reassurance that they’re important and loved.  Because they take care of us when we’re young, we sometimes see them as being impervious to feelings of inadequacy or jealousy, but they’re not.  They’re every bit as fragile and vulnerable as we are, especially as they age and start losing their own parents, siblings, and friends; in the long run, it’s not only easier to be compassionate than stubborn, but it’s better for our relationships (and our mental health). 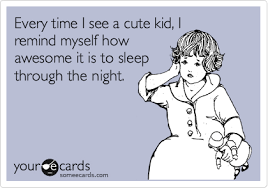 Beginning in my mid-twenties, my older friends started asking me if I wanted children.  “No,” I assured them, “I most certainly do NOT want a giant parasite inside my body.”  They would chuckle and say, “Okay — for now.”  Which was so infuriating.  They didn’t know what I wanted!  How dare they assume they knew me better than I knew myself!  When I hit my late twenties, my friends in their thirties and forties told me that the dreaded baby fever would be coming my way soon.  “You won’t be able to help it,” they said.  “It’s biology.”  One friend in particular gave me a specific age: thirty-two.  That’s when he claimed his sister and all of his female friends went bananas for babies.  I insisted that they were all crazy.  Why would I — someone who values personal freedom above all things and plans to travel the world — want to raise a child?  The idea was sheer nonsense to me.*

I turned thirty here in Korea and was happy to have this incredible life of easy work and lots of free time.  I could travel!  I had time to exercise every day!  I could have hobbies!  I turned thirty-one and got a university job and MORE free time.  And then it happened.  Somewhere in between thirty-one and thirty-two, I started seeing babies and toddlers everywhere.  What was happening? I wondered.  Was Korea experiencing a baby surge?  That couldn’t be it… the papers were reporting a steady decline in birthrate.  And then I noticed a change in my behavior: upon seeing these tiny humans, instead of thinking, “Blech,” I would think, “Ohmygodit’ssocuuuuuuuuuute!  I want to take it home with me!”  I would pause in the middle of whatever I was doing to stare at said children and smile like an idiot.  I stopped just short of grabbing mothers in the street to smell their babies’ heads.  Somewhere between thirty-two and thirty-three, it peaked — full-on baby fever.  When I saw any child under the age of three, my immediate reaction would be, “I WANT A BABY IN MY UTERUS RIGHT NOOOOOOOOOOW!”  It freaked me the fuck out.  At first, the fever only infected my uterus and not my brain, but eventually, it started getting so bad that I actually started questioning my choices and my path in life.  For real.

Then last week, I invited a couple of the elementary school teachers I taught last semester over for dinner.  I got a text from one of them: “Yes, Thursday is great!  B can join us, and we’ll bring our children!”  Oh, I thought warily.  I didn’t expect that (I should have, in retrospect — babysitters aren’t really a thing here).  I told them that I was looking forward to having all of them and decided on a child-friendly meal for eight.  Yes, that’s right: five children were coming to my tiny apartment.  Five children between the ages of four and ten.  I child-proofed the apartment (or at least thought I child-proofed the apartment) and braced myself.  The doorbell rang; as soon as the first two boys were in the door, they raced inside, immediately started climbing all over the furniture, running up and down the stairs, throwing things over my balcony (I live in a loft), and yelling at the top of their lungs, while their mom just watched, smiling.  I quickly ran around the house and started shoving anything breakable or potentially embarrassing into cabinets when the door rang.  Instead of answering the door while I was putting things away so her wildling children wouldn’t destroy them, my former teacher-student said, “Jo!  The doorbell!  B is expecting you!”  I stopped, perplexed, and went downstairs to answer the door.  Three more children rushed in and started to wreak havoc on my apartment.  At one point in the night, one of them threw a rubber toy that I’d gotten as a gift off of the balcony, and it hit me in the head (I promptly put it in a drawer).  I never got a chance to talk to the mothers, because the entire time we were either playing with the kids or watching them to make sure they didn’t suffocate or seriously injure themselves or each other.

My first reaction was one of irritation — when I was a kid and we went to a stranger’s house, we would never in a million years touch that person’s stuff without permission, let alone climb on his or her furniture!  My mom wasn’t the type to spank us (I sure like to be spanked now, but that’s another story), but I have friends whose folks would have beat the stuffing out of them had they acted like this in a stranger’s house.  I started relaxing once I started playing with the kids instead of freaking out about the way they were playing.  It took me an hour to clean the place and put everything back after they left.  The next morning, I tried to put a cultural perspective on it: In the US, we’re all about private property and private ownership.  You don’t touch my shit.  It’s an individualistic culture.  Korea has a collectivist culture, so people share things.  Everyone here is family.  When I thought about it like that, I felt honored that the kids and their moms treated me like family… but still a bit rankled.  Finally, I realized that the kids actually got to play and how valuable that it to them.  In Korea, children study all the damn time.  They never have the space or time to just be kids, and they got to be free for a couple of hours in my apartment, which is great.  As they were leaving, their moms told me that all of their kids wanted to have their birthday parties in my house.  “You couldn’t pay me enough,” I said, smiling.

Playing with kids generally makes me happy.  I was a camp counselor for a long time, and actually enjoy running around with children — as long as it’s not in my house.  They were pretty cute kids, and it was fun, but the best part of it all is that I no longer have baby fever.  So, readers, if you’re experiencing this bizarre malady and wish to rid yourself of it, I recommend inviting five unruly children into your personal space.

*Actually, when I was a high school student, I fully planned on having kids some day… and then I became a teacher, and that ruined that.

A sampling of hilarious and delightful things my former elementary students wrote:

1.  She (a teacher) is leave because we toke all the time.
2.  My mom is my hoes wife.
3.  When we finished shop, we went to the calculator.
4.  If I will be president I will kill all the people that eat alcholes.
5.  If you don’t brush your teeth you will get plague.
6.  I would travel by Car, becaus If I ride airplane, boat… I’ll throw-up and dizzy.
I would travel by whale, because it is free of charge, and good at earth.
I would travel by future traffic. (because it is better than now traffic).

I really miss those kids.